"I will act as if what I do will make a difference." -William James

This January, the CCEE collaborated with Smith Middle School’s French teacher Robin McMahon to host a Saturday morning learning experience centered on eight important WWII historic sites. Thirty students had the chance to learn through virtual and augmented reality, as well as first-hand recollections from former students who had visited all of these sites in person.

On the day of, as their Google Earth Videos played in the background, these eight students provided “live” tours, their videos and speeches working together to paint a vivid picture of each site and its vital role in WWII. Then MacMahon’s former students who had visited each site in person, read their journal entries reflecting on those visits, providing a personal perspective of these important locations.

In conjunction with the student speeches, CCEE staff created an interactive gallery walk featuring current and historic photographs of each site. To add interactivity, our staff used HP Reveal, an Augmented Reality app, to link an informative short video to each historic image. As an example, the staff linked a photograph of Juno Beach on D Day with a video of a Canadian WWII veteran sharing his own experience of Juno Beach, allowing students to imagine what it might have been like. During the event, students walked along looking at the photographs and watching videos, enjoying many moments of discovery.

To complement this photo/video gallery, the CCEE Staff designed and compiled curated Youtube Video Playlists, with at least three to four short videos devoted to each location. Videos included stories from veterans, footage from WWII as well as short historical synopses to teach students about each location. Each student chose a video or two to watch and then reflected on the video by writing a short review. 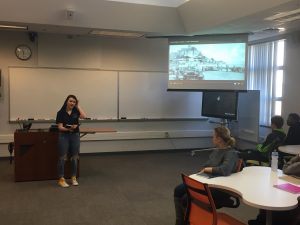 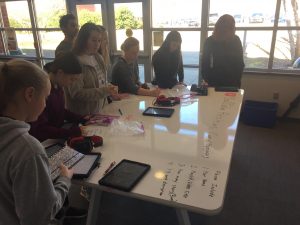 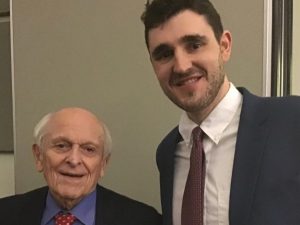